Love Sleep Play delivers content and articles about pregnancy, maternity, and the post natal care for your new baby 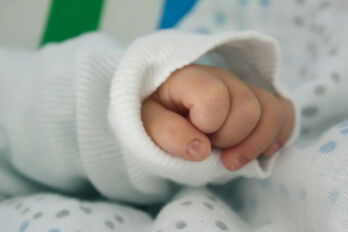 If you’ve been following pregnancy news lately, you probably know that there are discussions surrounding cord blood and its use for new babies. To keep you updated, and help you figure out if storing your own new baby’s cord blood is right for your family, here are some answers to your most pressing questions.

What exactly is cord blood?
Simply put, cord blood is the actual blood that’s stored in your new baby’s umbilical cord and placenta when you give birth. In most cases, the blood is disposed of and not used for any medical purposes.

Why is everyone talking about cord blood?
New information has recently surfaced about the potentially life-saving stem cells that can be extracted from cord blood. These stem cells have been used to help treat diseases like leukemia, lymphoma, and sickle cell anemia.

Who saves and stores cord blood?
Cord blood is either saved privately, for potential personal use within families, or publicly, where it’s donated for others to use. When parents decide to save and store their new baby’s cord blood, it’s collected quickly and safely by their health care provider. If the blood is meant for public use, there is usually no cost to the donor. Private cord blood banks -- which reserve the blood for use by the new baby or family members -- tend to be quite costly, however, with donors paying for all costs related to collection, transport, testing, and storage. Generally, health insurance does not cover the cost of the storage.

Deciding whether or not to store your new baby’s cord blood is a personal decision you’ll need to make with your family. Most experts don’t recommend private cord blood storage, as the chance a family member needing a transplant is slim and the public cord blood pool is always available to dip into. But if you have any questions, talk to your doctor about what is right for your family. 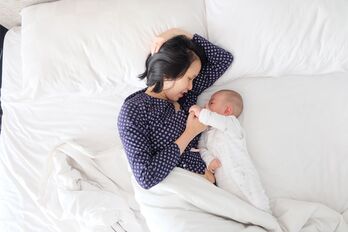 As your due date draws near, the nesting instincts you’ve been feeling throughout your pregnancy may be stronger than ever. These powerful urges can tempt expectant moms to do anything from painting the nursery to cleaning  gutters, washing drapes, and stocking up on diapers and onesies. It's important to focus on only what you are truly capable of doing without exhausting yourself, so you can save your energy to care or your new baby.

The urge to clean and organize your home (and everything in it) before bringing your baby home is a primal instinct that many animals, from birds to dogs, have during pregnancy. Though it’s unclear why these urges occur in humans, one theory is that they may be remnants from a time when physical preparation was necessary for women to have a safer childbirth. Nesting may begin months before your due date, but it is usually strongest just before delivery.

While using these nesting instincts can be a wonderful way to prepare your home for your new baby, or to tackle projects you haven’t had time to do before becoming a new mom, it’s important to make the most of your urges safely and not overdo it.

Here are a few things to keep in mind before you bring your baby home:

Try not to be discouraged if you don’t tackle everything you’d like to before you bring your baby home. Your new baby won’t mind if the bookshelves haven’t been organized in the nursery, or if her newborn outfits aren’t folded perfectly. All she wants to do is bond with you!

Photo by kevin liang on Unsplash 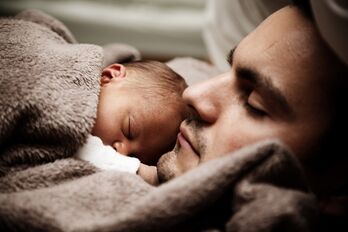 I confess: sometimes, I’m still blown away that we have a kid. I watch our son toddle around the room, and I’m amazed that he exists. I’m a parent!

I felt this way during pregnancy, too. As a soon-to-be first time dad, I had a hard time processing that my wife’s bump was hiding an actual human being. Although I was excited about our future, I also couldn’t believe it was happening. Between the nausea, the kicks, and constant hunger, my wife was constantly reminded that she was pregnant. I was busy with work and settling my family into a new house.

I imagine that a lot of new dads feel this way, too, but don’t want to admit it. But if it wasn’t for Caitlin’s giant belly, there were days that I might’ve completely forgotten I was a dad-to-be!

It was very important to me that I take time from my busy schedule to bond with my baby-on-the-way. Pregnancy goes by so quickly, and I wanted to stop and savor the moment with my wife and future son. It was in these quiet moments that I could truly process and appreciate what was happening to our family.

Here are four ways that I connected with Henry before he was born:

1) Massage: I’d rub lotion or oil into my hands and lightly massage my wife’s belly. She said it felt great, and I could feel Henry underneath my fingers. Sometimes, I’d even be able to identify body parts, like an arm or little butt! Henry liked the massage as much as his mom did; he’d often press up against my fingers.

2) Photo Diary: Caitlin and I took photos of her growing baby bump every week beginning at Week 10. We loved looking back through the images as we approached her due date.

3) Music: After I read that the baby could hear sounds while in utero, I began to play him music. When my wife was relaxing on the couch, I’d pull up my favorite songs on YouTube and put the speakers close to the bump.

4) Birth Classes: Caitlin wanted a drug-free childbirth, so we took 12 weeks of Bradley Method classes together. The weekly meetings were educational and great conversation starters. My wife and I had many talks on the drive home from class about our beliefs about parenting. The classes also made me more understanding of what Caitlin was going through with pregnancy, and I knew exactly how she wanted me to support her during delivery. It’s great to be as involved as possible during the pregnancy; it helped me feel connected to my little boy before he even arrived! 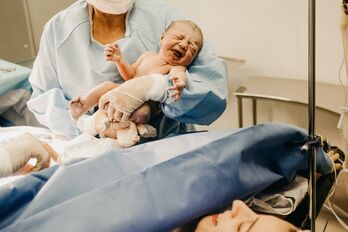 Pregnancy for me was fairly uneventful, aside from the exciting little fact of carrying my soon-to-be new son, of course. But uneventful in that my appointments were routine, I physically and emotionally felt good, exercised occasionally, and had no major hiccups -- just the tiny ones I felt in my belly.

It wasn’t until about three weeks before delivery that I noticed I couldn’t feel my son, Jacob, kicking as much. As any expectant mom knows, this can be alarming. I visited the hospital a few times to be placed on monitors, but from what myself and the doctors could tell, everything seemed to be fine. He was still moving and shaking, and I was not given any restrictions, nor was I placed on bed rest. This was around the 27 week mark.

It was exactly 30 weeks when my water broke in the middle of the night. At the time I was very nervous, but oddly, I was more excited to have the baby. I didn’t comprehend just how early it still was in my pregnancy, and thought the 30 week mark might not be that bad.

Despite my water having broke, the nurses were not sure I was in labor. It quickly became real when the contractions started. When I asked for pain medication, they checked me and realized I was already nine centimeters dilated -- there was no turning back. I was rushed into the delivery room and with just a few pushes, Jacob was born. He was very purple in color, but he was crying. The nurses immediately took him to the Neonatal Intensive Care Unit, NICU, and I started to feel better. Although I still wasn’t prepared for the long road ahead.

An hour or two after my premature birth delivery, I met with the chief of neonatology. That’s when reality began to really sink in. He told my husband and I that our little (and at 3 lbs 12 oz, I mean little) bundle of joy was very sick. Although very concerned, I was in such a fog I was sure things would be fine in the end.

Jacob spent two months in the NICU, trying to gain weight, breathe and feed on his own. When Jacob was first born he needed a lot of medicine, called Surfactant, to help his lungs develop. It took a while for him to breathe properly, but thankfully, he needed no surgeries. To this day, he has no major respiratory complications.

Once Jacob could eat and breathe on his own, which took nearly two months, it was time to take him home. I was beyond ready to start my new life as a mom, as nervous and unsure as I was. It took a while to stop checking his breathing every five minutes, but I’m pretty sure that’s a common practice among all new, hyper-paranoid moms!

Our major concern was a brain bleed that was fairly mild, but we believe has caused the cognitive delays he has to this day. It’s been a tough road raising a child who was born a premature baby. However, we are very lucky that Jacob had such incredible care while he was in the NICU. He required constant monitoring and following up to make sure he was meeting developmental milestones, and today he is a very healthy, sweet boy.