Confessions of a SAHD of Three 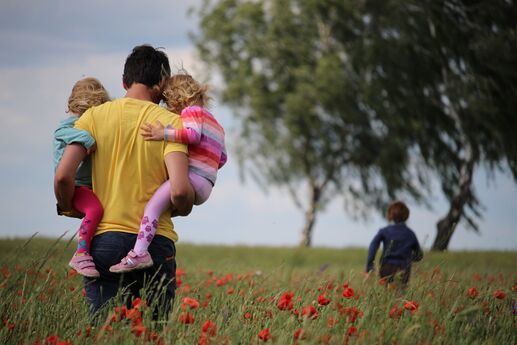 My name is John. I am a human alarm clock, a firefighter, a peace officer, a cook, a teacher, a husband, a photographer, a chauffeur, and a laundry service. In short, I'm a stay-at-home dad of three.

I wanted one, maybe two kids. If anyone would have told me I'd be a dad of three, I wouldn't have believed them. Who can afford three kids these days? Who has time to take care of three kids? With three, you and your wife are outnumbered. It's mayhem. Not me. Not us -- and that's for sure.

My wife, Christina, wanted the third. She wailed for months about how her life wouldn't be complete without a third. She went so far as to say she had a dream one night that there was another baby sitting up on a cloud somewhere, trying to find her way down to us.

So here I am. At least when they were babies, I could take a nap when they did. I worked when they napped. They didn't complain when I served them strained peas.

Having my children nearly five years apart means that they are all in different schools and need to be awakened and driven at different times. These days, my life is like the movie Groundhog Day, only four times in a single day.

My daughter, the cloud-sitter, is the most trying in the morning. She tries on three or four outfits before pronouncing them all "horrible." I attempt to watch YouTube videos demonstrating various types of braids, so I can get her hair just right. My efforts usually end in tears -- mine, not hers! I must promise to watch the video while she is in school, so as to get it right the next day. For the next five hours, I squeeze in cleaning up, a shower, working on my photography, grocery shopping, and laundry.

The arrivals home are staggered like the departures. The oldest arrives first, and the homework parade begins. While I am cooking dinner, I hear my daughter screaming that my middle son is in her room, so I need to go make peace. After he complains that he is "bored," he goes in his room to make some kind of electrical project which has on occasion caused him to run out yelling "FIRE!"  While I am putting out the fire, I will hear banging in the backyard, where his brother is building a fort -- with wood he got from my deck. "You said you were going to tear it down someday, right?" he asks, innocently.

When I was in the throes of colic and 2:00 a.m. feedings, I told myself it had to get easier. But now, I see the truth: It was easier when they were babies. It's twice as hard now. Twice -- times three. But you know what? It's also three times the joy, three times the pride, and three times as much love. And I wouldn't have it any other way.

Photo by Juliane Liebermann on Unsplash

As a stay-at-home dad, I struggle to keep my two children happy while saving the house from the terror these tots can unleash. Many new dads can cut the lawn, fix a lamp, and grill a steak, but it takes a true pioneer to feed, wash, and entertain two girls under age 3. Here’s how I managed it with my two daughters:

Watch your watch. As much as you might want to be the “cool dad” who moves to his own beat and changes direction on a dime, this isn’t going to work for most children. Kids thrive on a regular schedule and expect meals, naps, playtime, and sleep to occur at about the same time each day. To minimize meltdowns, keep a daily routine, and stick to it like clockwork.

Put them to work. No, not stacking firewood in the driveway or handing you nails when you’re on the ladder. Smart stay-at-home dads think smaller -- and easier. Kids love to help sort things by size and color, so when it’s time to fold the laundry, give them a task (“Can you find the matching sock?”). A toddler can also stack books, put toys in a basket, and help empty grocery bags.

Keep it short and sweet. Long outings with endless errands are a recipe for disaster with two young children. Covering a lot of ground will only leave you with a couple of exhausted, hungry, and annoyed little monsters. Instead, set the bar low and only tackle a couple short errands at once.

Don’t forget the surprises. Even the best-laid plans can fall apart and end in tears. Stop the tantrums before they start by keeping some tricks up your sleeve. An ice pop for your toddler, goofy voices for the new baby, or even whipping out a brand new coloring book will work wonders.

Don’t forget to rest. Being a stay-at-home dad to more than one child is exhausting, to say the least. You’ll get burnt out if you don’t slow down the pace every now and then. I suggest stealing some shuteye when your kids go down for a nap or calling in a babysitter so you can catch up on errands without your kids in tow.

Even on the busiest days, I wouldn’t change anything about our routine. Being a stay-at-home dad to our daughters has brought me more joy than I could have ever imagined!

Photo by Derek Owens on Unsplash

My Best Day Ever as a Stay-At-Home Dad 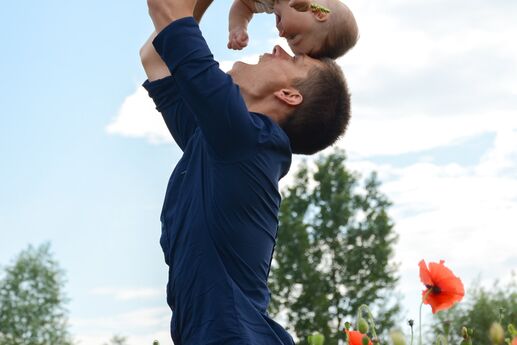 Most people would say that their best day with their child would be the day she was born, her first day of school, or her first recital. Or maybe it's something funny that sticks with you, like the first time you needed to (quickly!) create a shield with the diaper as your newborn son gives you his first "shower."

As a stay-at-home dad, I get to see more of the everyday happiness than my wife. I have the privilege of seeing my daughter's new best friend come over for a play date, help my son learn to ride a bike, or get the first peek at a straight-A report card.

Honestly, though, my best day as a SAHD was nothing like that. I'm the one who is home during the day, so I field all the calls from school. From "your son forgot his lunch" to "your daughter has a fever," I handle any mini-emergencies that crop up during the school day. My favorite moment as a stay-at-home dad was unexpected: My son, Niko, was suspended from school. Yes, you read that right.

I didn't feel that way, though, when I got the call from the principal. I was horrified -- until I heard the whole story. As it turns out, it was the policy of this particular school that all children involved in an "incident," no matter what their involvement was, are suspended. And Niko's involvement was sticking up for his friend who was being bullied. He was trying to do the right thing. And I was so proud, because it would have been far easier for him to avoid that suspension by pretending he didn't see what was happening.

I knew it would have been easier for Niko to keep his head down and just go to his classroom, because that's what I had done. This conversation with the principal reminded me of my own childhood. Decades ago, when a friend of mine was being harassed by a group of bullies, I didn't do anything, because I was scared. I still think about him from time to time.

There have been times when I feel like I mess up as a SAHD, but if I've learned one thing, it's that on this crazy ride of fatherhood, you just have to hold on tight and trust that you are doing more right than wrong. And on that day, I found out I had.

Photo by Natasha Ivanchikhina on Unsplash

My Surprising Life as a Stay-at-Home Dad 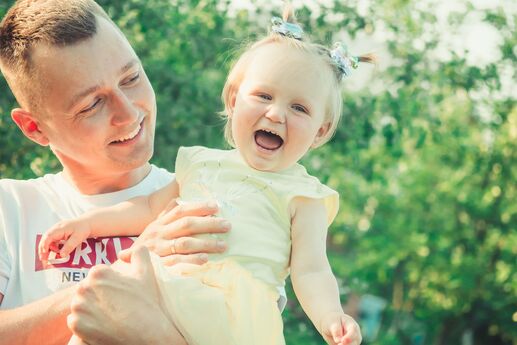 I had always imagined myself working in an office even after I became a father. I could see myself coming home and having the old-fashioned sort of life.

However, after I became a part of my first startup in 2003, I started to look at things differently. I began thinking about staying home, being a father first while maybe running a little business out of the house, spending as much time with my kids and wife as I wanted.

Lucky for me, the job market helped me make my decision. When I graduated from law school, I was already a new dad, as my wife and I already had 8-month-old twin babies at home. We felt isolated where we were living in Akron, and we wanted to move closer to family, so we planned on moving back to St. Louis, MO. I even took the bar there and passed, but with the economy the way it was, it was hard for me to find a job in St. Louis. Plus, my wife already had a good job in Akron, so we ended up staying.

I’ve continued looking for work, but an opportunity has not presented itself for me -- at least not one that can beat my current gig: SAHD. As a stay-at-home dad, I rarely have a day that I would consider average. My babies are my alarm clock. Most days my wife leaves for work before our two girls are up. I get them up, make breakfast, and then try to do a little work on the businesses, all while still entertaining 2-year-olds. We work on our numbers and ABCs, and generally try and have some fun. I’ve started two companies from home as an attempt to find a way to contribute to the household finances, but my priorities are my girls.

The ability to spend time with my girls this way is something I never thought I would have the chance to do as a new dad, and it is the most rewarding experience of my life. As with anything new, though, there are trade-offs. The reversed roles of my family, and the fact that I had more of a traditional upbringing, have taken a lot of getting used to, and a lot of pride swallowing. It is not always easy, but I have always told myself that nothing worth having comes easy.

While trying to balance and redefine my role as a stay-at-home dad, I’ve had the opportunity to watch my girls grow and develop into little people. I love playing with them, and I enjoy their company. As a young physician, my father worked 36 hours straight, had a short time off, and then went right back to work. I saw him for fleeting moments when I was little, and never really had the chance to spend any time with him; something both he and I wish had been different. The fact that I get to spend almost every waking moment with my daughters is an amazing opportunity. Regardless of the frustrations, time constraints, and other events, it’s something I relish every day.