Newborn Photos with the Family 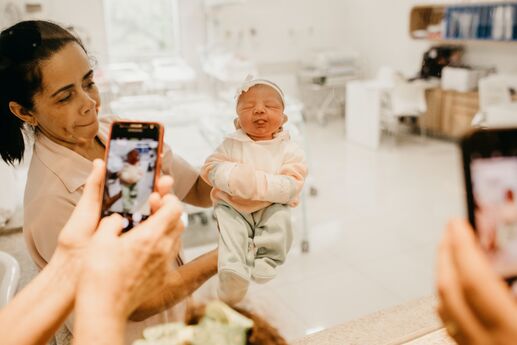 When it comes to taking newborn photos, for me, it was just as important to get some great shots with the whole family as it was to capture some of my favorite moments of just my new son.

In order to make sure I got as many family memories as I could, I came up with the three genre of family photos that I wanted to make sure we tried for. Here is what I decided on:

Recreate the Past: One newborn photo idea that I have always thought was cute was taking a photo of a family member from the time they were a baby and recreating it with your own baby. For instance, there is this photo of my husband from when he was a baby, and he’s on his belly looking at a toy giraffe that’s next to him with this look of determination on his face. Now, Rory makes that same face when he’s looking at stuffed animals, so we’ve tried to recreate the same magic from the original shot. Using an older photo that reminds you of your parents or grandparents or spouse is a nice way to get different generations involved in your newborn photos.

Start a Tradition: I recently  saw a story on TV about a girl who went with her dad to New York City once, they took a photo in front of a building, and they decided to go back every year and take one to showcase how the girl grew from year to year. We decided to take that idea and make it our own. In our house, college football is a big thing, and we plan to take our son to his first tailgate this fall. Our plan is to take Rory to a particular place on campus when we’re there and take a family photo of the three of us. Then we’ll try to go back every year and have an album of it throughout the years. That’s a nice way to see how Rory grows and to keep our whole nuclear family involved in the tradition.

If you can’t think of a tradition that applies to your family, holidays or specific times of year work well, too. For example, my husband’s family goes apple-picking every year, so that would be a nice tradition for us to include Rory for a photo op.

Share and share alike: Today, there are all kinds of websites that allow you to upload and share newborn photos with your entire family, which is a really nice idea, especially for grandparents, aunts, or uncles who might live far away. Most sites allow you to invite visitors to upload photos as well, so you can all share whatever photos of your baby you might happen to have. Another nice way to share photos with the family is through photo baby books, like Pampers Baby Book. That way you can upload all your favorite shots and create a tangible gift for your loved ones.

I like that while some family may live far away, we can still keep Rory connected -- and if it’s through adorable newborn photos of our son, then all the better!

Photo by Jonathan Borba on Unsplash 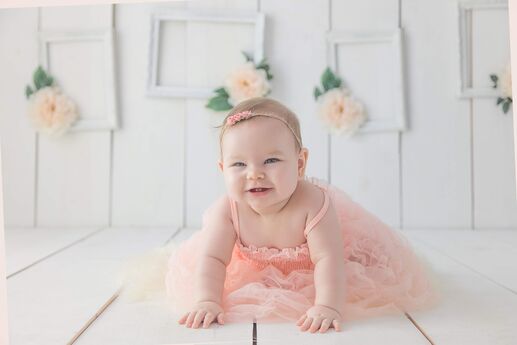 When I took on the best job of being a new mom, I hadn’t realized I had also hired myself for another job: baby paparazzo. In a baby’s first year, there are so many developmental baby milestones and heart-melting moments to be captured; a camera should be glued to a new mom’s hand. These milestones and memories, both major and more personal, were some of my favorites:

Smiling: When my daughter was a newborn, there were fleeting moments of a smile, typically preceded by a rumbling bottom. It was about 10 days before her 2-month “birthday” that sitting on my lap, with a big smile on my face trying to encourage her to do the same -- she followed suit and smiled at me. Cue: heart explosion.

Laughing: I wish I could say my new baby’s first laugh was caused by my outstanding sense of humor, but it was her grandfather who takes the prize. After hearing the sound of his laughter, my daughter made some giggles of her own.

Discovering hands and feet: Around the 4-month mark, while lying down, my baby slowly started bringing her hands together and examining them in front of her face. Two weeks later, she found her feet, which led to constant sock removal. The discovery of both is a picture worth taking.

Sitting up/playing by herself: At about 5 months old, while holding my daughter up in a sitting position, I slowly let go. She stayed upright, hunched over in tripod position. A few days later, I wanted to see if she could use this new talent to play by herself, and she was successful. I put a musical piano in front of her, and she pushed the keys (still hunched over), showing one of her first signs of independence. I had to snap that!

Eating solids: My daughter tried her first taste of gourmet rice cereal at 5 months. While most of it ended up on her bib, there is little that is cuter than a tiny face full of mush.

Cruising and pulling up: Around the 8-month mark, my daughter showed the first sign of wanting to walk, when she held onto her toy chest and pulled herself up to a stand. A week later, with the help of her activity table, she began slowly moving her feet -- only walking to her left. Eventually, she learned to walk right, and before I knew it, she would be across the room in a second.

Crawling: My baby was cruising like a rock star before she showed any interest in crawling. She would mostly lie on her belly, kicking her legs and arms like a frog swimming, while we placed her favorite toys just a bit out-of-reach. It wasn’t until she turned 11 months -- and a mere 2 weeks before she learned to walk -- that she decided to become mobile and crawl.

Waving: Hearing the song, "Open Shut Them," in a music class helped my daughter practice opening and closing her hands. At 10 months, she used that skill to do the motion in response to “bye bye” and “hi,” communicating her ever-increasing friendliness.

Clapping: Around 8 months, my daughter’s claps consisted of fist-bumping herself. We clapped and celebrated seemingly everything she did, so she learned pretty quickly through imitation. She began clapping for everything she did, particularly in response to “yay” and “hooray.” There is nothing like patting yourself on the back.

Walking: My daughter cruised for months before taking her first steps, but once she got it on her own, she took off and hasn’t stopped since! It took the comfort of seeing her parents across from each other, knowing we would be there to catch her when she fell.

Photo by yuri tasso on Unsplash